A woman in red knitwear – with matching nails, lipstick and Mini Metro – inspects a spot in the rearview mirror. Inspects, or possibly squeezes, between those red nails. It’s hard to tell; her face is half-obscured by the Metro’s A pillar.

A hairy man stares blankly from a Ford Cortina Mark V special edition Crusader, bearded chin obscured by the matt black special edition wing mirror. Another man in a Vauxhall Astra Mark 1 holds something in his right hand. You would say it was a phone if this was today, but it’s not, it’s nearly 30 years ago, so possibly a Dictaphone? Jimmy Tarbuck meanwhile points a finger in the air on the side of a Routemaster behind the Astra, advertising microwave ovens, it would seem.

Related: Me and my Cortina: drivers in the 1980s – in pictures

From a Renault 30 (remember when Renaults were numbers, not Zoes and Capturs?), a large woman smiles. And an unseatbelted man (Oi! Clunk-click!) delivers bricks in his truck: Lazdan builders merchants still operates out of Bow today, my research reveals, with the same phone number, though 01 has become 0208. Maybe he’s the boss now.

Who are these people in their cars, stuck in traffic? Why and where and when? 1987, one day in May, a lovely day; you can tell it’s hot by their clothes and open windows, and their pissed-off expressions. In east London and the City. There’s a reason for the gridlock, too: the privatisation of Rolls-Royce Holdings, which photographer Chris Dorley-Brown calls one of the “Tory public company jumble sales” popular at the time in the foreword to his book, Drivers in the 1980s. Everyone was “trying either to get to the sell-off, or mainly, trying to avoid it”. I think maybe the woman in the Renault 30, the only person smiling, has already got her share allocation. 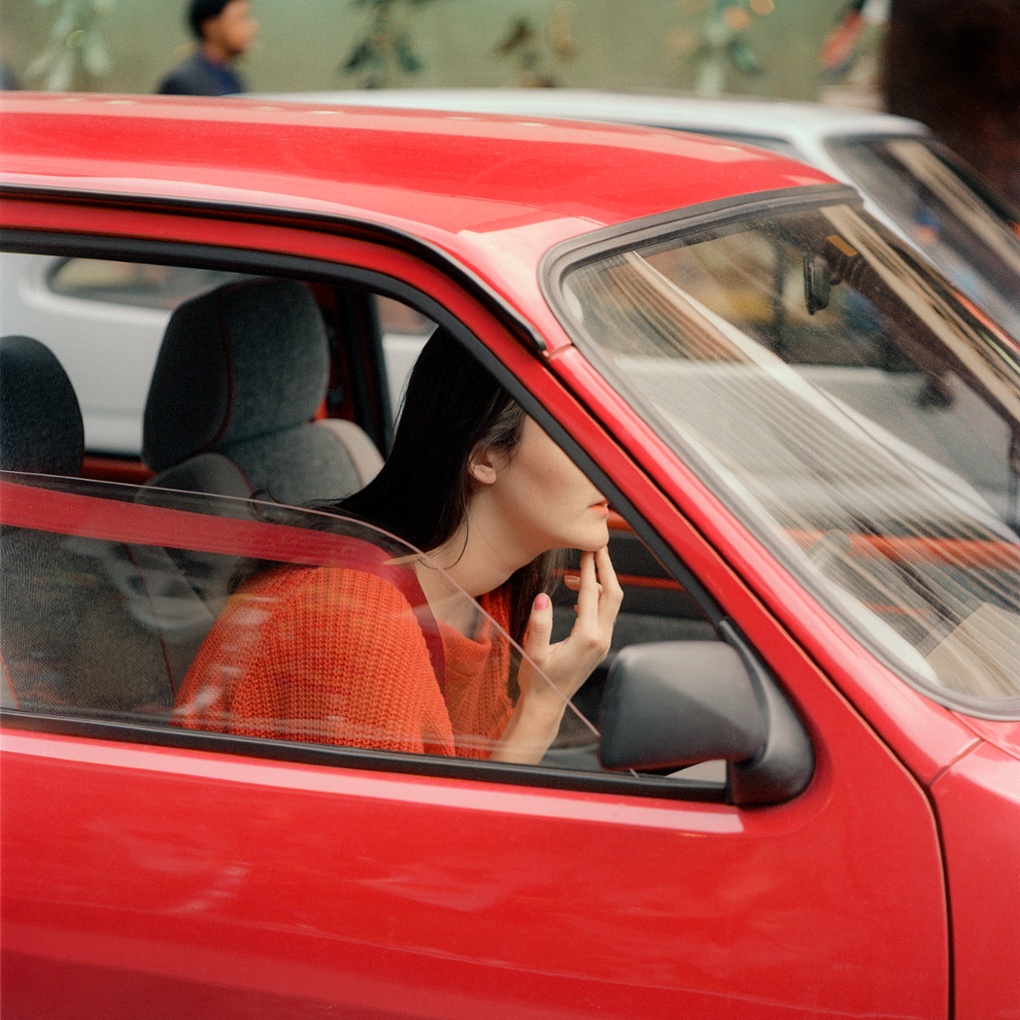 So who is Dorley-Brown? Both a photographer and a car man (he grew up among them; his dad had a garage and a breakdown truck, and when young Chris read JG Ballard’s Crash, he felt it had been written especially for him), on that day he was looking for a picture that would capture the sell-off. He ended up taking photos of people in their cars. “As far as I and the Rolleiflex were concerned, they were asking for it. I could get close, very close, they were sitting ducks.”

Twenty-eight years on, the pictures make a curious collection. I’m no photography expert but I would say that individually, none of them is winning any awards. Composition-wise, there are all those pillars and mirrors in the way. And on a bright day, with stark contrast between light and shade, all their faces are in the dark; it’s their right elbows that are catching the light.

But then that is what people look like in cars, and it adds to the snapshot feel. Click, place and time, captured. 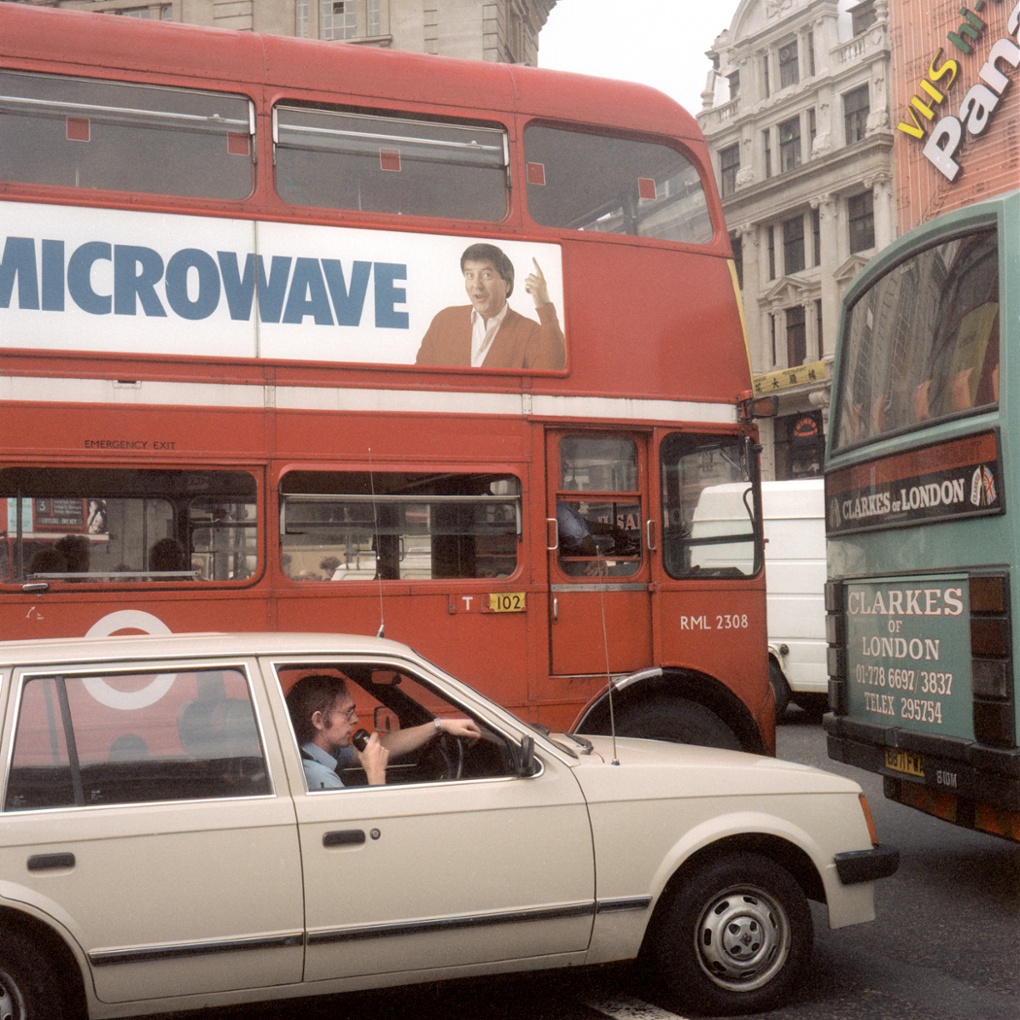 I’m enjoying them with a mixture of nostalgia and horror. Cars are good at taking you to the past, both because they encapsulate their era and, more personally, because they involve families and journeys, hot cars especially (it’s a chemical thing; the heat helps to trigger a nostalgic reaction). My own dad had a Cortina, never a Crusader though, for which he must forgo a small amount of filial piety.

The horror is 80s horror: crap cars, crap hair, crap clothes, crap jewellery. There’s probably crap music coming out of those windows too, Money for Nothing by Dire Straits most probably, mixed in with the hot throbbing and the diesel fumes of the bus. A nice irony, too – all those people brought to a standstill by the Iron(ic) Lady’s economic progress. Crap politics.

Most of all they’re just funny. Because of that 80s horror, and the irony, and because of their utter banality. It’s an entertaining banality though, a lovely WTF-ness, and a very human humour. Look, funny people in funny cars, not going anywhere, in the boom time. Boom boom, Tarby might be saying, up there on his bus.

Drivers in the 80s is out on 4 May, published by Hoxton Mini Press