The partially built Pinnacle building is to be revived to become the tallest tower in the City of London – but without the elegant twisting design at the top that earned it the nickname “the Helter Skelter”.

After months of negotiations, a consortium led by Axa Real Estate has clinched a £300m deal to buy the site near Liverpool Street station in the Square Mile. The building became known as “the Stump” when construction stopped abruptly three years ago.

Until now called the Pinnacle, the building will be renamed 22 Bishopsgate. Its design has undergone radical changes to save money. The office tower will be 60 storeys rather than the originally planned 64, and the expensive curved-glass panels at the top are to be scrapped. It will however be the tallest building in the financial district at 262m, overtopping the nearby Heron Tower at 231 metres tall (758ft).

Construction on the Pinnacle began in 2008 but stalled in 2012 when funding dried up, leaving a seven-storey shell. Developer Lipton Rogers has been brought in to remove the stump and build a new tower, taking over the reins from Australian contractor Brookfield Multiplex.

The new design means a fresh planning application will have to be submitted. If planning issues remain, it could take a further 18 months to gain consent, ensuring the tower would not be finished until 2018. Around £400m has already been spent on the Pinnacle, meaning the total spend could reach £1bn.

The French firm Axa’s property arm, along with Singapore’s Temasek Holdings, a Middle Eastern and a North American investor, have bought the site from a consortium of Middle Eastern investors. The group – Arab Investments, the Saudi Arabian sovereign wealth fund Sedco and Kuwaiti fund Wafra – will retain an interest in the top floors of the building. 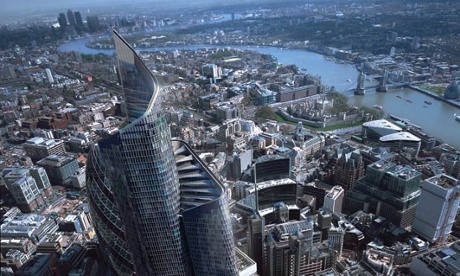 An artist’s impression of the Pinnacle. Building work stalled at the 7th floor. Photograph: public domain

The Axa consortium has appointed PLP Architecture, a firm set up by Lee Polisano, Karen Cook and other architects who left US architects Kohn Pedersen Fox Associates, where they worked on the Pinnacle’s original design. PLP has also designed part of Land Securities’ £2.2bn project to transform the area north of London’s Victoria station.

A rival consortium, which lost out to the Axa team, stuck closer to the original design and would not have needed new planning permission, which would have hastened construction.

A number of other towers have been built in the City in recent years, including the building nicknamed the Cheesegrater on Leadenhall Street and the Walkie Talkie on Fenchurch Street, and the Shard across the river – western Europe’s tallest building.

Brookfield has embarked on another office scheme in the City, a two-tower building at 100 Bishopsgate close to the stalled Pinnacle site.

Axa Real Estate has been involved in several other large-scale projects in the capital. It built 60 Holborn Viaduct and let it out to Amazon. It is also developing Google’s new £650m UK headquarters behind Kings Cross station, which is due to start construction later this year.