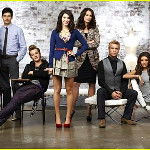 As Jane is getting ready for school, she receives a text from Gray, leaving Jane once again with many obligations. As Jane enters the kitchen, she tells Ben that she is nervous about seeing Billy after two months of being in juvie. Jane confesses to Ben that the last thing Billy said to her was, “It’s You!” Ben believes that Billy may have meant it in a romantic way but Jane finds that hard to believe.

When Jane arrives at the detention center, she sees Billy approaching the car. Both Jane and Billy gaze at one another for a moment before Jane runs into Billy’s arms. During the car ride home, Jane asks Billy about juvie. Billy becomes reluctant to tell her about his experience, claiming that juvie “is no Alcatraz.” Jane tries to change the subject and mentions the night of the fashion show. Jane once again wants to know what Billy meant by “It’s You” but Billy cuts her off mid sentence and asks her how her double life is going.

At school, Jane asks Billy if everything is okay between the two of them, and Billy insists that their relationship is good. Meanwhile, Jane and Billy witness Lulu and Nick walking arm in arm. Jane informs Billy that the two have been an item ever since school ended.

Ms. Shaw discusses Jane’s grades with her, and tells her that she is nervous about the stress Jane’s internship is putting on her school life. Ms. Shaw says in order for Jane to keep her internship, she must keep up with her grades in school.

Jeremy lets it slip to Jane that Gray wants to offer her India’s old job. Jane claims that she is not ready for such a big promotion.

When Jane mentions her possible promotion as a designer at Donovan Decker to Billy, Billy seems annoyed that Jane may give up high school for the job. Since Billy will not admit he has a problem with the promotion, the two get into an argument. Jane feels like Billy has not been himself since he returned from juvie.

Lulu approaches Billy’s locker, claiming that she misses him but Billy wants nothing to do with her.

Nick sits with Jane as she attempts to perform a chemistry experiment. Nick tries to apologize but is interrupted by an urgent text message from Gray. As the bell rings, Jane runs out of the classroom without giving Nick a second glance.

Ben tries to find out what is wrong with Billy, but Billy insists that he is okay. Jane interrupts their conversation hoping that both Billy and Ben would be willing to cover for her at school while she finds out what Gray needs from her at Donovan Decker. Both say «no» and Jane argues that she will be fine on her own.

As Jane approaches Donovan Decker, a young man shows up at Gray’s office with flowers. Jane is taken by surprise when she finds out the young man, Eli, is interviewing for a position with Gray. Gray informs Jane that Eli is her nephew. Jane becomes worried that Eli will take India’s old position as a designer

Ms. Shaw asks Ben why Jane is missing from school. Ben tells Ms. Shaw that Jane is home sick because she has cramps. Still having doubts, Ms. Shaw approaches Billy to find out the truth. When Billy tells her that Jane is in bed with a cold, Ms. Shaw becomes suspicious.

Jane asks Jeremy for advice about her possible promotion. Jane is unsure if she is appropriate for the job but Jeremy believes she can do it. During Jane’s conversation with Jeremy, Jane begins to realize why Billy has been upset all this time.

Jane texts Billy asking if they could talk but Billy ignores it.

Ms. Shaw tells Ben that she wants to see proof that Jane is home sick. If not, she threatens that Jane will lose her internship.

Ben tells Billy that they need to find Jane and bring her home but Billy initially tells Ben he does not want to get involved. Ben argues that he cannot let Jane lose her dream for fashion and decides he is going to help her.

Ben tries to stall Ms. Shaw by telling her he has a lot of grading to do. Ms. Shaw doesn’t buy it and tells Ben she insists on visiting their home in 10 minutes.

Billy shows up at Donovan Decker as Gray is announcing her next stylist. As Jane notices Billy, she interrupts Gray’s speech taking herself out of the running as India’s successor. Jane tells Gray she not ready for such an ambitious position and Gray agrees. She announces Eli as India’s successor.

Jane leaves with Billy, happy at the fact that he came to get her although they have been fighting.

Ben calls Jane to warn her that Ms. Shaw and him are on their way home. At a stoplight, Jane and Billy see Ben and Ms. Shaw. Ben tries to distract Mrs. Shaw by kissing her.

Billy and Jane take a shortcut and run the rest of the way home.

As Jane tries to put on PJs in her closet, Ms. Shaw barges in her room, leaving Billy to have to pretend to be Jane underneath her blanket. As Ms. Shaw leaves the room, Jane and Billy laugh, surprised that Ms. Shaw actually fell for their trick.

Billy finally opens up about juvie, telling Jane how terrible it was being in there alone. Jane asks Billy again what he meant when he said, “It’s You,” and Billy tells her that he just meant that Jane is his best friend and he does not want their relationship to ever change. Jane then kisses Billy on the cheek and lies down next to him.

At Gray’s office, India shows up shocking all of Donovan Decker. Is India in the business of seeking revenge? I guess we will find out next week!