Big news coming out of the Craftsman & Wolves camp today:

Not only have chef-owner William Werner and co. finalized a lease for their second San Francisco modern patisserie-cafe, but they have also hired one of the country’s top pastry chefs in Angela Pinkerton . 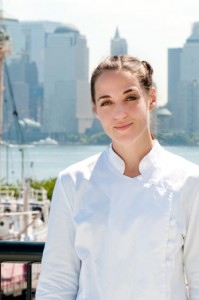 Pinkerton was most recently the pastry chef at New York’s celebrated Eleven Madison Park. She spent six years there as executive pastry chef (and eight years overall), racking up all kinds of honors with the four-star restaurant, including the 2011 James Beard Award for the country’s Outstanding Pastry Chef; read this nice interview for more on what she did at EMP.

Now, Pinkerton is in the Bay Area. She is working toward her own project eventually, but figured Craftsman & Wolves would be a fitting entry point to the California sweets scene.

“I was looking for something totally different,” Pinkerton says. “After being at Eleven Madison Park and in restaurants for years, I was looking for a change. I really love what they do at Craftsman & Wolves. I have a lot respect for what they’re doing … I want to be a part of it and get my hands in there.”

They are ramping up the online shop , as well as a new Southern California location later this summer in Culver City’s Platform development , which will also include Blue Bottle and new restaurants from Michael White and the Cannibal guys.

And ladies and gentlemen, here in San Francisco, Craftsman & Wolves will open its long-awaited, often-rumored second outpost. The new location will be found in Russian Hill, at 1643 Pacific Avenue (between Van Ness and Polk). For the most part, the menu and concept will largely resemble the Mission original, though the space is smaller. The plan is to open in May; expect further details in the coming months.

The Pacific Avenue branch is on the ground floor of a new building that Chronicle urban design critic John King memorably described as “a 21st century concoction that looks like something cooked up in pre-World War I Paris.” In many ways, it’s a fitting building to house Craftsman & Wolves, since Werner’s pastries — like chocolate croissant stacks, or smoked ham and cheese twists — are undoubtedly set in the 21st century, but oftentimes take their cues from tradition.