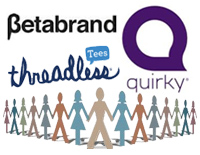 Move over, Daily Deals and Flash Sales, «Crowdsourcing» is now the biggest fad in ecommerce. Sites in which members invent, design, curate and market products for the marketplace are gaining in popularity. Three such sites shared their stories at a panel at the Shop.org conference in Denver last month, and online merchants attended to see if they could use the concept on their own sites to increase customer engagement and boost sales.

David Wachter wanted to learn how his company, JimmyJazz.com, might engage with its urban-clothing customers to inspire designs and new products. «Urban clothing is now a dirty word,» and Hip Hop artists like Beyonce and Jay-Z don’t wear their own clothing lines, Wachter said.

«Everyone is wearing the same clothing, we’re looking for new innovation, and it’s not coming from the community,» he said.

Wachter was looking for answers from the panel, which consisted of Anand Shah of Threadless, Ben Kaufman of Quirky and Chris Lindland of BetaBrand.

Norwest Venture Partners’ Josh Goldman, a venture capitalist who is betting big on the community-commerce model, moderated the panel. He told attendees that social commerce is not turning out to be what people thought it would be a few years ago and called the model used by the panelists «social operations.»

The three panelists sounded as idealistic as eBay founder Pierre Omidyar had when he pitched customers and investors on his community-focused auction site in its early years, before eBay went public and eventually moved away from its community model.

None of the panelists thought the term «crowdsourcing» fully described their companies’ model. «Who wants to join a crowd,» asked Quirky founder Ben Kaufman, who said his company engaged in «push and pull» conversations with users. «If it’s a contest, call it crowdsourcing,» but that’s not what Quirky does, he said.

He also said you must get people in at the beginning, «otherwise it’s just feedback, not ownership.»

What These Companies Do Differently The three companies rely on community members to submit ideas, vote on submissions, and help market the site. 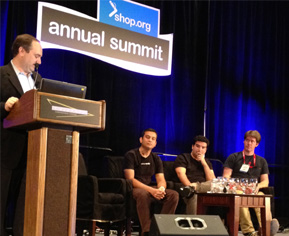 Threadless lets users submit T-shirt designs, and the Threadless community rates them and provides feedback. Threadless uses community sentiment to decide which designs should become the next Threadless product. Designers whose submissions are selected receive $2,000 in cash, a $500 Threadless Gift Certificate (that can be redeemed for $200 cash), and $500 in cash each time the design is reprinted.

BetaBrand describes itself as an online-only clothing company that designs, manufactures, and releases new inventions every week in limited batches — what Lindland has referred to as a Beanie Baby approach. Rabid fans snap up the items before they run out, and a «Model Citizen» promotion encourages new and existing customers to upload photos of themselves to the site. Betabrand creates a custom URL that that make it look like they’re featured models on the Betabrand website. «You’ll become an instant Internet sensation — and snag a 10% discount on any order in the next 24 hours.»

Quirky solicits ideas for inventions. «After you complete the submission process, our community will voice their opinion. The top concepts are chosen every week. If your idea is chosen, you’ll earn a perpetual royalty from us. Perpetual means forever. And money forever does not suck.» The company brings two brand new consumer products to market each week.

Saving Money Putting Community to Work Wall Street was attracted to eBay in the 1990’s because its users did much of the marketing and took on most of the risk (they still do) — the online marketplace «was only a venue» when disputes arose or fraudsters scammed members.

While Threadless, Quirky and BetaBrand use a different business model than eBay, there are parallels — the biggest being the cost savings generated by having the community do much of the work, which ranges from product design and market research to marketing.

For example, Lindland said BetaBrand’s customers send in photos and videos of themselves using the BetaBrand products, providing a significant saving in marketing costs. The company doesn’t have to read expensive research reports on what’s going to be popular in a year-and-a-half, he said — community members provide ideas, and it can bring the product to market far faster than other brands.

Shah said if Threadless employees had to do what its community of 2.2 million users do on its behalf, it would have to triple its workforce.

Quirky said it typically takes a company 18 months to bring a new product to market. Quirky makes two products every week at a far lower cost. In addition, Quirky’s community members provide pricing feedback so the company has built-in research data on how to price its products.

Reward the Community It was easy to see how buyers and sellers benefited from eBay even back when community was an intrinsic part of the marketplace. How do these new sites reward community members?

Lindland said BetaBrand created a way for all of its users to be featured models through its «model citizen» app. Everyone who submits a photo receives a unique URL where they are the model of that product, so they can share it with friends. «It can’t just be the winner that wins. Everyone has to win,» he said.

Shah said there are some Threadless community designers who are making six figures.

And with Quirky, it’s not just the person who submits an idea for an invention who receives royalties. The company explains on its site, «Quirky reserves a portion of all product sales for the community: 30% of direct sales and 10% of indirect sales. Think of that reserved portion as the community «pot». When you earn influence in a product, it means you’re entitled to part of that reserved portion. Or, if you’re picturing the community «pot,» how much delicious money soup goes to you.»

Where Should the Community Engage? Goldman asked the panelists, if community commerce was a conversation, where should it take place — on their own companies’ websites, or on a social platform?

Kaufman said it was irrelevant — wherever creative people are, he said. Lindland said you want the conversation to take place at the dinner table and offline.

The panelists all agreed that story-telling was important to their companies. «Products must have great stories,» Kaufman said.

As for Wachter, he left the session brimming with ideas for his urban-clothing retail business. With 170 stores and three brands, JimmyJazz.com needs to find ways to satisfy its customers. «Urban-clothing suppliers are dying,» he said, and hopes he can use some of the techniques Threadless.com’s Shah described to bring new life to his company’s ecommerce business.