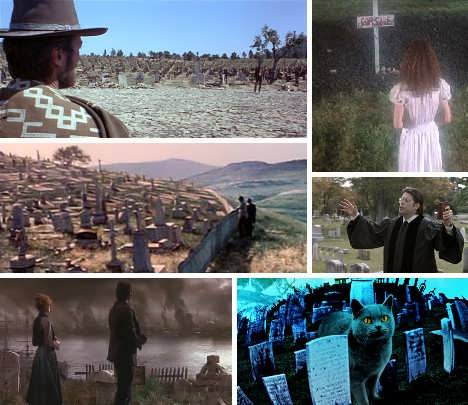 Cemeteries are a staple of horror movies new and old, and when it comes to setting a suitably horrific tone, the creepier the better. These 10 creepy cinema cemeteries pull out all the stops, featuring choking undergrowth, tilted headstones and a general malevolent air of disrepair. Best of all, most are easily accessed via DVD, YouTube and television: same tomb, same channel. 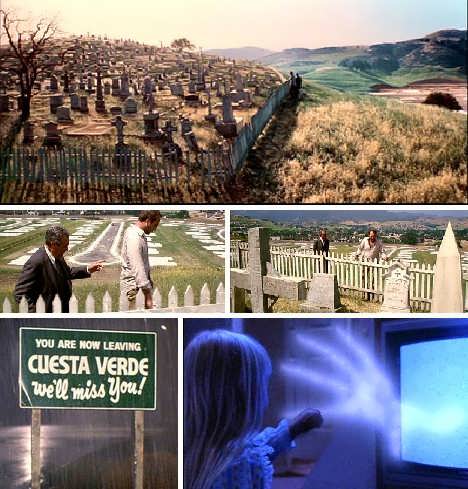 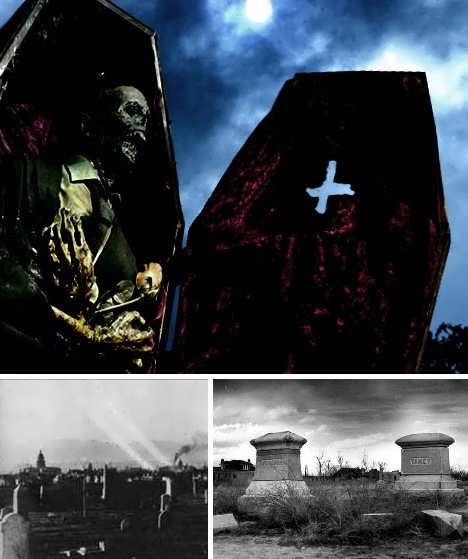 Though the overgrown cemetery depicted in the film was merely a matte painting, the story behind it is factual: Mount Prospect cemetery in Denver, Colorado, was converted to a public park in the late 1890s and removal operations commenced. The undertaker put in charge of the relocation was paid $1.90 per body but pocketed most of the cash – up to 5,000 unclaimed bodies were left in situ. Residents living nearby have long reported moaning sounds and other odd manifestations occurring at night, blamed on lost and confused spirits looking for the light. 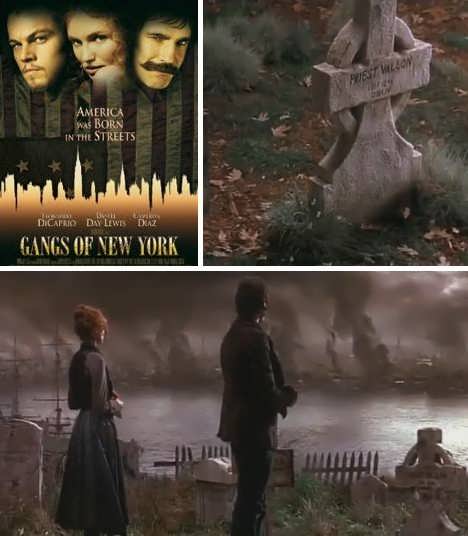 (images via: Cameron Diaz and WorldNews.com ) 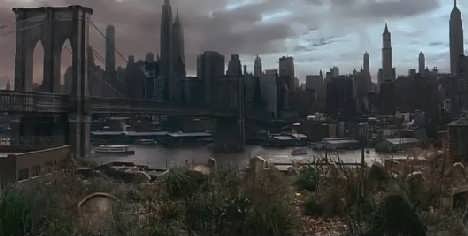 The cemetery where the DiCaprio character’s father, Priest Vallon, is buried doesn’t make an appearance until the final scene of the 167 minute epic but it’s one of the film’s most powerful scenes, masterfully wrapping the long and convoluted storyline. Unlike many movie cemeteries, this one actually exists: it’s Green-Wood Cemetery in Brooklyn. 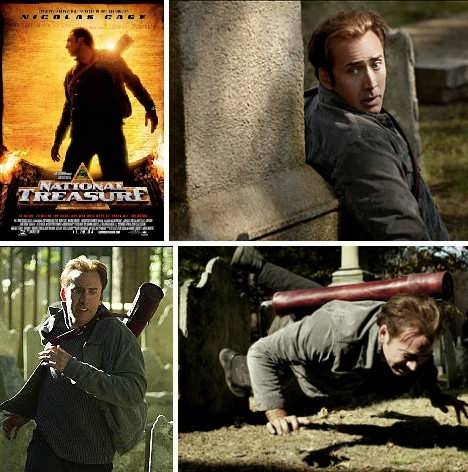 Whether you love or hate Nicholas Cage – and he has his haters to be sure – the National Treasure franchise has proven to be an ideal showcase for his acting talents. The first film in the series dates from 2004 and offers viewers a veritable smorgasbord of history, action, adventure and even a few laughs (mainly provided by nervous tech expert Riley Poole). National Treasure is included in this listing by virtue of a notable chase scene through a cemetery: Christ Church Burial Ground in Philadelphia, Pennsylvania. Not quite Tomb Raider but for a moment at least; tomb dodger. 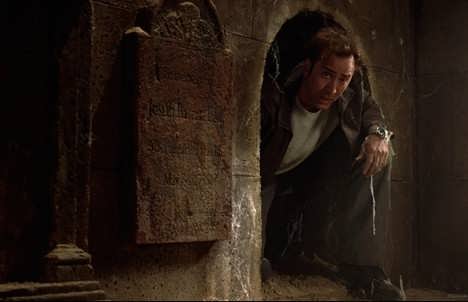 Dating from 1719, Christ Church Burial Ground hosts a number of historically noteworthy Americans including Benjamin Franklin. Oh, those headstones damaged and destroyed by gunfire during the movie chase scene? Merely dummies, not to worry!

Here’s the trailer for National Treasure, a money-maker at the box office that helped revive Cage’s career and reputation. 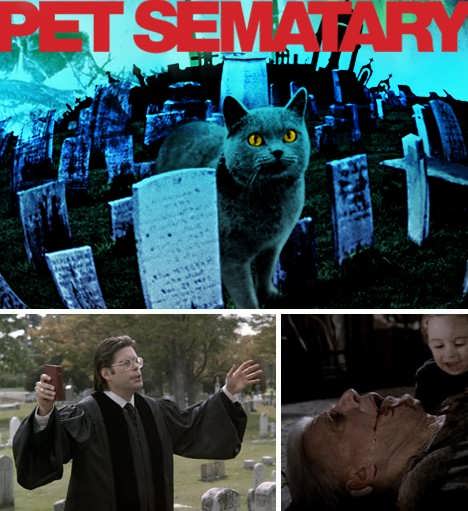 “I don’t want to be buried, in Pet Sematary.” So sang The Ramones and if you saw the film I’m sure you’ll agree. One of Stephen King’s more successful screen efforts, 1989?s Pet Sematary also brought Fred Gwynne (The Munsters) favorable reviews that may have helped him land the part of Judge Haller in 1992?s My Cousin Vinnie . 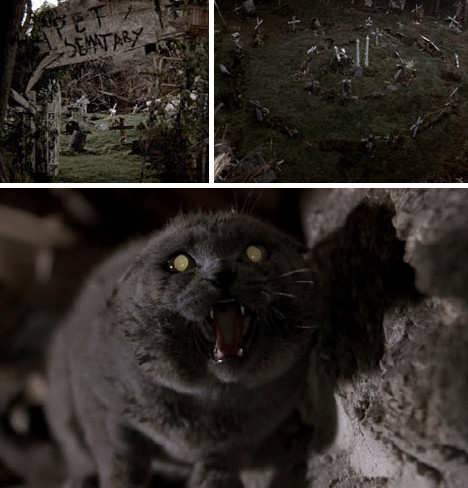 Pet Sematary is pure horror, however, and that includes Stephen King’s bit part playing a priest. The whole idea of pet cemeteries is, well, kinda creepy to begin with and Pet Sematary builds on that disturbing premise. Animal zombies? Get your tickets here. 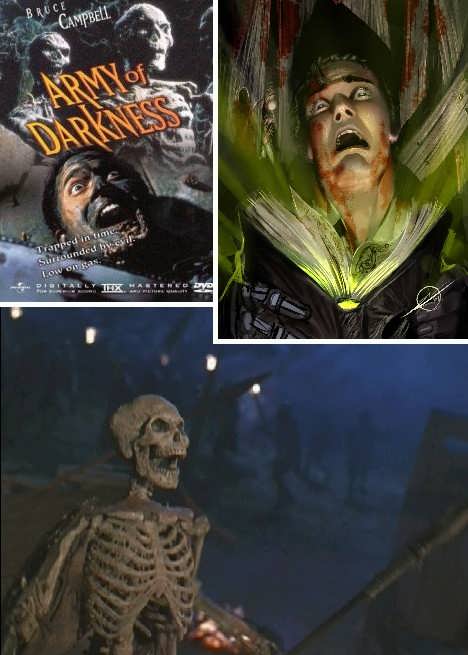 Known by some as Evil Dead 3, 1992?s Army Of Darkness stars perennial alternative action hero Bruce Campbell as Ash, a “boomstick”-wielding discount-store clerk transported back to the year 1300 AD. Between slaying monsters and getting a girl who was beautiful once ( “Honey, you got reeeal ugly!” ), Ash steals the Necronomicon from a stereotypical spooky cemetery and all Hell breaks loose… one demon at a time. 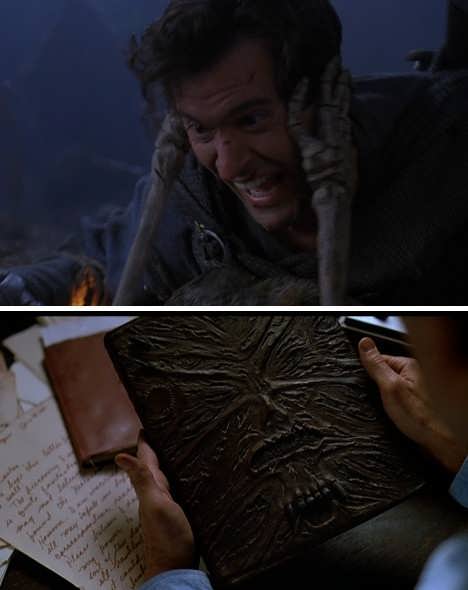 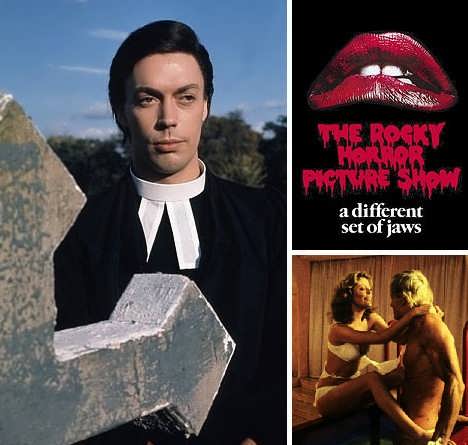 Next time you’re in the proverbial doghouse and want to make it up to your significant other, tell her you’ll take her to a Susan Sarandon movie… and make sure it’s The Rocky Horror Picture Show , for both your sakes. Long before there was Tim Robbins, there was Barry Bostwick and, of course, Tim Curry chewing the scenery for all he’s worth. Rocky Horror was pretty hot for 1975 and it’s aged well… not unlike the aforementioned Ms. Sarandon. 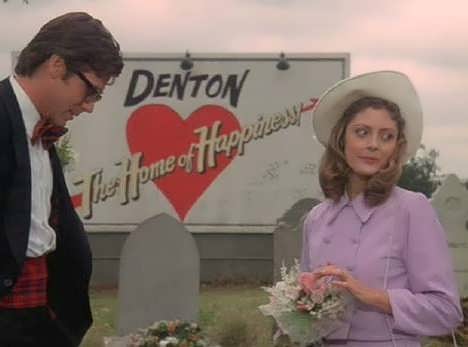 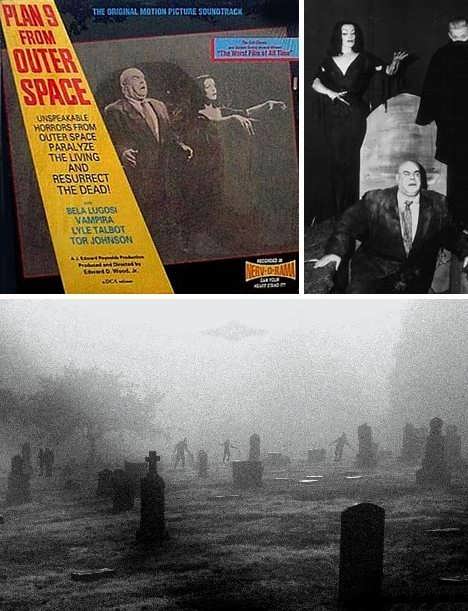 “When it came to making bad movies, Ed Wood was the best.” So went the tagline from Ed Wood , the 1994 biopic of the flamboyant director played with gusto by Johnny Depp. Wood’s best bad movie was undoubtedly 1958?s Plan 9 From Outer Space , a low-budget, high comedic (though not intentionally) flick that raised the bar for cinematic cheesiness. 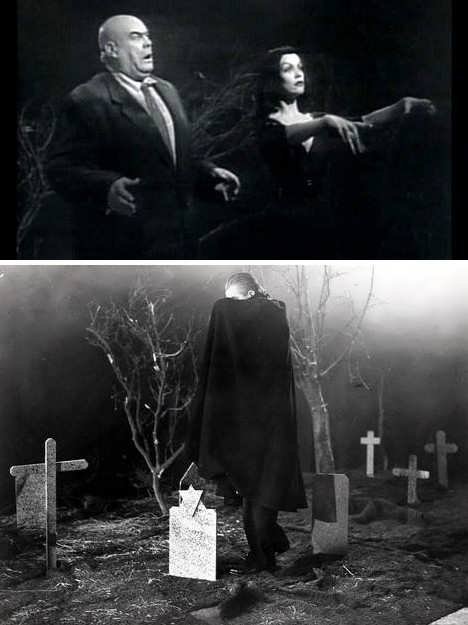 Plan 9 from Outer Space could serve as an instructional video for film-makers as it offered up just about every error possible. Boom mike shadows, exceptionally poor special effects (a string holding up a flying saucer catches on fire at one point), the use of footage of an actor (Bela Lugosi) who had died 2 years earlier, and cardboard tombstones that wobbled or fell over were part & parcel of this celluloid travesty. 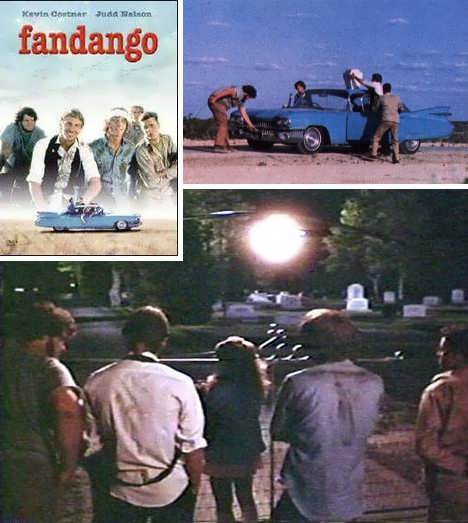 Overlooked in its time but emerging as a true cult classic, 1985?s Fandango starred Kevin Costner and Judd Nelson – but don’t hold that against it. Fandango is a road trip film with a message, a last waltz through the American southwest for 5 college pals calling themselves The Groovers. 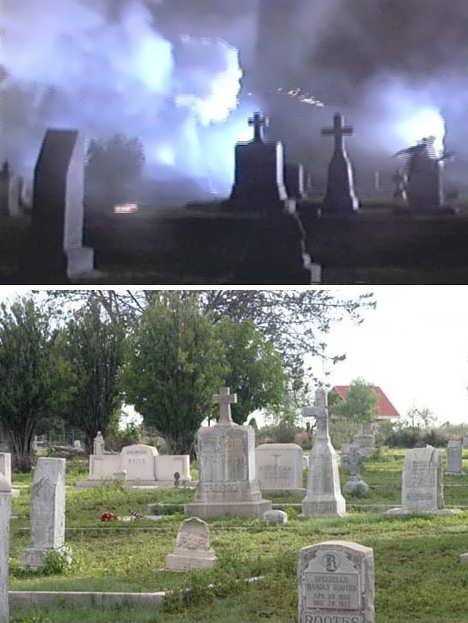 With Vietnam on the horizon, The Groovers decide to live it up while they can. Their final fandango includes skydiving, train-surfing and an apocryphal fireworks fight in a cemetery that eerily foreshadows the ultimately inescapable war overseas. The cemetery used in the film actually exists and is located in the town of Marfa, Texas.

The trailer for Fandango showcases the fireworks fire-fight scene among others. Rent this DVD while Blockbuster’s still in business. 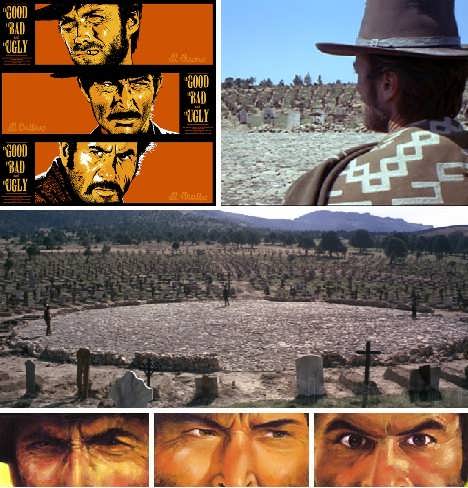 The film that gave “spaghetti westerns” a good name, The Good, the Bad and the Ugly was trashed by most critics upon its release in 1966 but is now rated among the best films of all time. OF ALL TIME (thanks, Kanye). The story follows three very different men who reluctantly work together in search of the same goal: $200,000 in stolen Confederate gold buried in a Civil War cemetery. 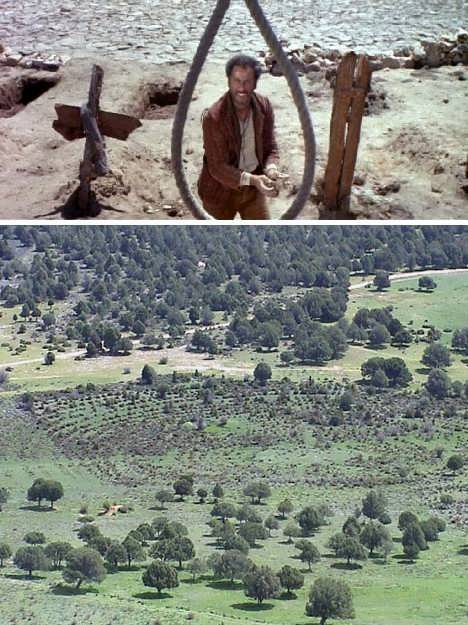 Filmed on location in Spain, the film’s epic climax is a three-sided Mexican standoff between Blondie (The Good, played by Clint Eastwood), Angel Eyes (The Bad, played by Lee Van Cleef) and Tuco (The Ugly, played by Eli Wallach) in the center of Sad Hill cemetery. The winner of the gunfight would be able to read the name of the grave in which the gold was to be found. Director Sergio Leone wasn’t able to find an actual cemetery to suit his needs so his chief of pyrotechnics paid 250 Spanish Army soldiers to construct one – it took them just 2 days. Almost 50 years later, the basic layout of the cemetery can still be seen at Carazo near Salas De Los Infantes.

Though the film doesn’t feature a cemetery in the true sense of the word, the final scene does depict Carrie’s final resting place complete with a desecrated cross – and a single mourner who attempts to leave a bouquet of flowers. Bad idea, Sue, VERY bad idea. 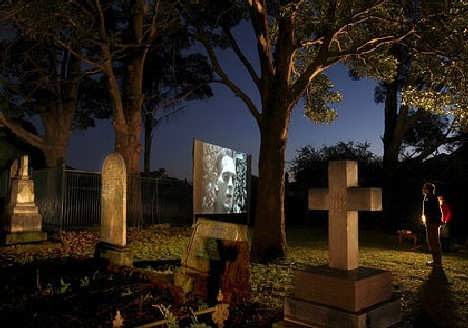